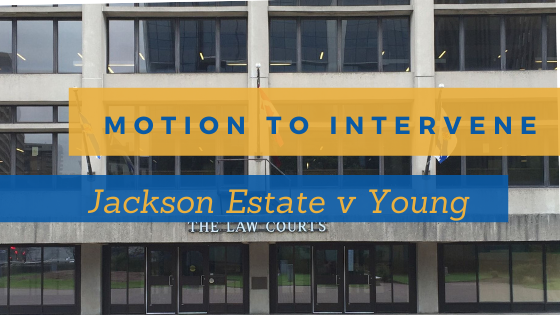 LEAF seeks leave to intervene before the Nova Scotia Court of Appeal in Jackson Estate v Young to highlight the importance of women’s socioeconomic equality.

On Thursday, March 5, 2020, LEAF filed a motion seeking leave to intervene in Jackson Estate v Young, at the Nova Scotia Court of Appeal (the “Court”). This appeal will consider whether a common-law spouse is entitled to any part of their spouse’s estate when that spouse dies without a will. If granted leave, LEAF will argue that limiting the applicability of legislation governing intestate succession (when someone dies without a will) to married spouses will have an adverse impact on women’s socioeconomic equality. LEAF’s proposed intervention will highlight the gendered impact the decision will have on the socioeconomic equality of women upon their common-law spouse’s death.

Judith Jackson died intestate (without a will) in August 2017. At the time of her death, Ms. Jackson lived with Bill Young, her common-law spouse of more than a decade. Ms. Jackson was the sole owner of the property where the couple resided.

Ms. Jackson’s two adult daughters became administrators of their mother’s estate and started proceedings to remove Mr. Young from the property. Mr. Young then sought to inherit Ms. Jackson’s property as a “spouse” under s. 4 of the Nova Scotia’s Intestate Succession Act (the “ISA”). He argued, in the alternative, that the exclusion of common-law spouses from the ISA violates his equality rights guaranteed under s. 15(1) of the Canadian Charter of Rights and Freedoms (the “Charter”) in a manner not justified under s. 1. of the Charter Mr. Young also claimed equitable remedies against the estate.

The trial judge dismissed Mr. Young’s claims. He found that common-law spouses are excluded from inheriting under the ISA. He held that this exclusion infringes s. 15(1) of the Charter, but that the infringement is justified under s. 1, which is used to justify a limitation on a person’s Charter right. The judge concluded that the significant impact on the equality rights of unmarried spouses was proportionate to the legislation’s objective, which he determined was to preserve choice and individual autonomy in how couples conduct their affairs.

LEAF’s interest in the appeal

LEAF will offer the Court a contextual and gender-informed analysis under s. 1 of the Charter by highlighting the gendered implication of limiting the application of the ISA only to married spouses. The frequency of common-law partnerships is increasing, and intestacy (the situation where people die without a will) affects traditionally marginalized or equality-seeking groups, including low-income and racialized people. Women’s inability to access support and family property upon the death of a spouse contributes to the feminization of poverty.

The history and text of the ISA suggest that legislators historically did not view common-law partnerships as legitimate family structures. LEAF will argue that the rationale for limiting the ISA to married spouses is rooted in stereotypes and prejudice and cannot be justified under the s. 1 analysis.

Furthermore, LEAF will argue that the trial judge inappropriately relied on the s. 1 of the Charter analysis in Quebec v A, a Supreme Court of Canada decision. Because this case arose from a unique context within the Civil Code of Quebec, the Supreme Court’s analysis cannot be transplanted to the current case.

LEAF’s interventions are all guided, informed and supported by a case committee composed of academics and practitioners with expertise in the relevant issues. The case committee members for this intervention were (in alphabetical order): Clare Burns, Jodi Lazare, Robert Leckey and Martha McCarthy. LEAF gratefully acknowledges their contributions to the leave application.

LEAF thanks Kelly McMillan and Nasha Nijhawan of Nijhawan McMillan Petrunia Barristers for their pro bono work on this leave application. Should the Court grant LEAF leave to intervene, they will also represent LEAF in this important intervention.

The Women’s Legal Education and Action Fund (LEAF) works to advance the substantive equality rights of women and girls through litigation, law reform, and public education. Since 1985, we have intervened in landmark cases that have advanced equality in Canada—helping to prevent violence, eliminate discrimination in the workplace, provide better maternity benefits, ensure a right to pay equity, and allow access to reproductive freedoms.