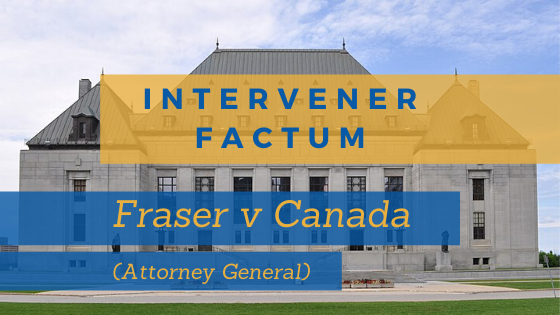 On Friday, November 22, 2019, the Women’s Legal Education and Action Fund (LEAF) filed its intervener factum with the Supreme Court of Canada (SCC) in Fraser v Canada (Attorney General), a case about equal access to pensions for female RCMP officers with caregiving responsibilities.

Joanne Fraser, Allison Pilgrim and Colleen Fox (the “Appellants”) are former Royal Canadian Mounted Police (RCMP) officers who participated in the RCMP’s job-sharing program. Under the job-sharing program, two employees would split the hours of one full-time position.

LEAF submits that courts must always give full consideration to the context of the Appellants’ claim, including the systemic devaluation of women’s work and caregiving responsibilities, in order to engage in a proper substantive equality analysis, which has been described as the “engine” of s 15 of the Charter.

Section 15’s purposes of promoting substantive equality and preventing the perpetuation of pre-existing disadvantage can only be realized if courts ground their analysis in the claimants’ perspective, including the social, political and legal context structuring their claims.

In this case, however, the robust concept of substantive equality required by the s 15 test was undermined by the lower courts who ignored the very context surrounding the design of the RCMP pension plan. This context includes the fact that RCMP remains a male-dominated workplace, and that the pension plan is based upon “male pattern employment” of a permanent, full-time worker with long and uninterrupted service, and providing enhanced access to pension benefits to those who fit this norm.

Gendered child, elder and other family caregiving responsibilities have historically driven and continue to drive “female pattern employment”, creating the overrepresentation of women in part-time work, including job-sharing. The systemic devaluation of women’s work and caregiving contributions that implicitly marginalizes work arrangements outside of the male full-time norm has resulted in the gendered nature of differential access to workplace benefits, including in such areas as pension design.

By abstracting their analysis from the relevant context, the lower courts erroneously concluded that the Appellants’ pensions were impacted because they had chosen to job-share. The focus of the court’s analysis should not be on the “choice” of the women to work in temporary job-shares in order to meet family care responsibilities. Rather, the court must focus on the government’s design of the pension plan which, regardless of the government’s intent, effectively privileges “male pattern employment” and has an adverse impact of lower pensions for workers encumbered with family caregiving responsibilities. The lower courts’ analysis fails to consider whether the government should have designed the pension scheme differently to provide “equal benefit of the law” to employees engaged in diverse, gendered employment patterns.

LEAF’s interventions are all guided, informed and supported by a case committee composed of academics and practitioners with expertise in the relevant issues. The case committee members for this intervention were Clio Godkewitsch, Jennifer Koshan, Kathleen Lahey, Nathalie Léger, Elizabeth Shilton, Susan Ursel, Jonette Watson Hamilton, and Claire Young. LEAF gratefully acknowledges their contributions to the arguments in this factum.