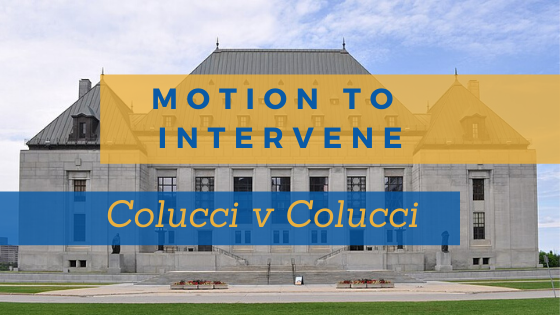 On Thursday, April 30, 2020, LEAF and West Coast LEAF filed a joint application seeking leave to intervene in Colucci v. Colucci at the Supreme Court of Canada (the “Court”). Colucci is a case about retroactive decreases in child support obligations and the impact of those decreases on women and children’s substantive equality. This case asks: what are the circumstances in which a judge can decrease the amount of child support someone owed in the past because his income went down during that time?

This case, on appeal from Ontario, concerns a father who—over 16 years—chronically underpaid child support to a mother, resulting in a debt of over $170,000. During that time, the father failed to disclose his income, rarely made voluntary support payments, and absconded twice without notice to his family or the Family Responsibility Office overseeing his support—first to the United States, and then to Italy. After his children no longer qualified for ongoing support because they were grown, the father applied to substantially rescind his debt. The Superior Court of Justice granted the father a retroactive reduction in child support arrears,  reducing his debt to $41,642.

The Supreme Court of Canada will have the last word on whether this ruling holds. In hearing the case, it will decide the factors that should be taken into account when a judge is deciding whether to retroactively reduce, or retroactively increase, the child support that someone owes.

This case will have a direct impact on the economic disadvantages faced by women that are perpetuated by structural and systemic discrimination, or what is called the “feminization of poverty”. In the overwhelming majority of child support cases, payor parents are men and recipient parents are women. Every unpaid child support instalment contributes to women’s socioeconomic inequality and deepens child poverty.

If granted leave to intervene, LEAF and West Coast LEAF will ask the Court to affirm substantive equality as an interpretive principle informing the exercise of judicial discretion under the Divorce Act when modifying child support orders. It is well documented that parents who receive child support—most often, mothers—are systemically disadvantaged in terms of information and resources.

LEAF and West Coast LEAF are concerned that the current child support regime incentivizes payors to conceal income or delay payments. It also places undue responsibility on recipient parents to press payor parents for information as to whether there has been a material change in their income. These concerns are aggravated in the context of intimate partner violence, where interactions between ex-spouses can precipitate further violence. LEAF and West Coast LEAF intend to propose a child support regime framework that takes these issues into account.

LEAF’s interventions are guided, informed and supported by a case committee composed of academics and practitioners with expertise in the relevant issues. The case committee members for this intervention are (in alphabetical order): Natasha Bakht (University of Ottawa); Vicky Law (Rise Women’s Legal Centre); and Deepa Mattoo and Tamar Witelson (Barbra Schlifer Commemorative Clinic). LEAF and West Coast LEAF would like to thank Jennifer Klinck and Joshua Sealy-Harrington (Power Law) for their work as pro bono counsel.

West Coast LEAF is the first and only organization in BC dedicated to using the law as a strategy to work towards an equal and just society for all women and people who experience gender-based discrimination. Since its founding in 1985, West Coast LEAF has helped bring about some of Canada’s most important feminist victories for reproductive rights, workplace standards, fairness in family law, legal protections from sexual harassment, and more.