Changes to the federal Divorce Act were meant to come into effect in July 2020. In this document, former Member of LEAF’s Board of Directors Susan B. Boyd (Professor Emerita, Peter A. Allard School of Law, University of British Columbia) and Linda C. Neilson (Professor Emerita, University of New Brunswick) provide a guide to properly interpreting the Divorce Act in light of Observations published by the Senate and general rules of statutory interpretation. The document is now also available in French.

These changes to the Divorce Act were long overdue. For the first time, a definition of “family violence” has been added to the Act, and family violence will become a mandatory consideration when determining the best interests of the child.

It is, therefore, very disappointing to learn that on June 5, 2020, the Minister of Justice announced that the coming into force of these changes, which received Royal Assent in June 2019, is now being delayed to March 1, 2021.

As Senator Dasko, a LEAF Board member, recently stated, “We know that family violence is deeply gendered, and we are learning that the effects of the pandemic are also gendered. Family law experts are bracing for a surge of women and mothers seeking divorces after months of social isolation with abusive partners. How can we reconcile this reality with [the] government’s decision to push back the coming into force of this bill to next year?”

Senator Dasko also pointed out that the government did not appear to do any research or analysis into the impact of the delay on women and children across Canada, which is out of step with its commitment to conduct a gender-based analysis of its decisions.

We call on the federal government to bring these changes into effect in July 2020, as was originally scheduled. 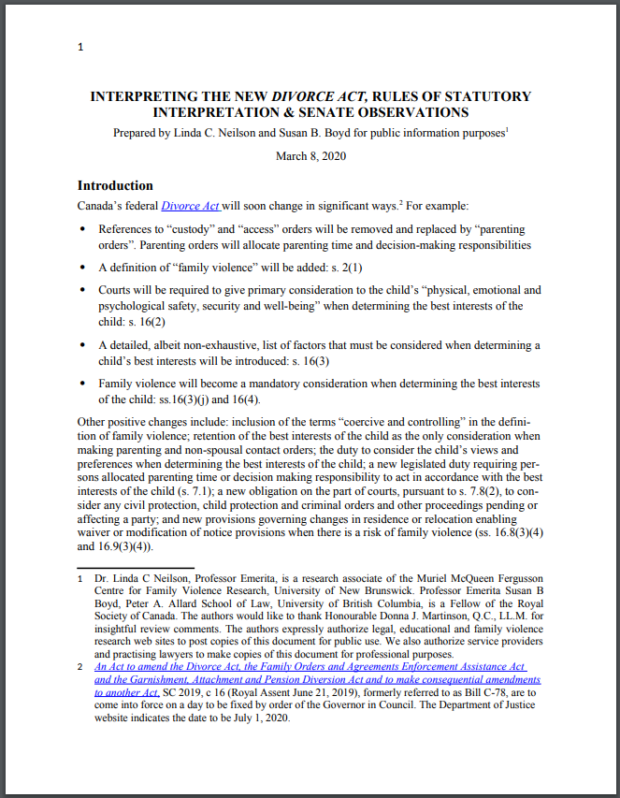 LEAF testified both the House of Commons and submitted briefs to both the House of Commons and the Senate on the changes to the Divorce Act. While LEAF applauded many changes to the Act, we also proposed amendments that would promote women’s substantive equality and safety as well as children’s safety, security and well-being. Several of our key concerns were picked up the Senate Committee in its Observations, and serve as a base for this Interpretive Guide.

For example, the Divorce Act will now state that one of the factors to take into account when assessing the best interests of the child is “family violence”. According to both the Senate Committee’s Observations and principles of statutory interpretation, when thinking about family violence as a factor, people applying and working with the Act should keep in mind the well-documented reality that women and children are those most harmed by family violence. They should also be mindful of the potential consequences of awarding parental responsibilities to someone who engages in family violence. In our brief to the Senate Committee, we emphasized the highly gendered nature of family violence, specifically as a form of violence against women, and urged the Committee to recognize that “this gender imbalance directly affects the interests of children and needs to be considered in the application of the norms in Bill C-78.”

Please share this guide, available in both English and French, widely with advocates, lawyers, and decision-makers working in family law.