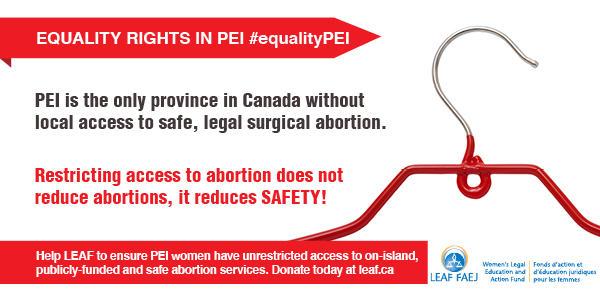 Status Update: In September 2016, The P.E.I. government announced that a Women’s Wellness Centre will be built at the Prince County Hospital in Summerside. The centre will be part of a $5.35 million expansion of Prince County hospital. The following services will be offered at the centre:

Construction is expected to take 18 months. During the construction period, women’s wellness programs at the hospital will be offered (starting January 2017) in temporary space in the hospital.

LEAF and AAN PEI remain committed to holding the government to account with respect to its announced plan. For more information please click HERE.

Prince Edward Island (PEI) is the only province in Canada without local access to safe, legal surgical abortion.

The government of Prince Edward Island has a policy that no surgical abortions will be performed on the Island. As a result, PEI women have had no access to abortion in the province since 1982, and must travel to Nova Scotia or New Brunswick for the procedure.

On January 5, 2016, a group of local activists, Abortion Access Now PEI (AAN PEI), with the support of the Women’s Legal Education and Action Fund (LEAF), will initiate a legal challenge against the Government of Prince Edward Island in respect of its abortion policy. AAN PEI is required to provide the government with 90 days’ notice of the intended challenge. You can see the notice here and the draft Notice of Application, the final version of which will be filed in 90 days, here.

Through this legal challenge, AAN PEI seeks full and unrestricted access to on-Island, publicly-funded abortion services for PEI women, and argues that the government’s abortion policy is unlawful, discriminatory and offends the Charter rights of PEI women.

PEI’s Abortion Policy is a state-imposed barrier to the right and ability of individual women to exercise control over matters fundamental to their physical, emotional and psychological integrity. Difficulty, uncertainty, delay, lack of access and stigma cause PEI women physical and psychological harm, including harm to conscience and dignity.

Founded 30 years ago, LEAF is the only women’s organization in Canada committed to confronting all forms of gender discrimination to achieve equality for women and girls under the Canadian Charter of Rights and Freedoms. LEAF applies the Charter to challenge laws that discriminate against women.

Many of LEAF’s cases have yielded landmark victories in addressing violence against women, eliminating discrimination in the workplace and providing greater access to reproductive rights.

LEAF has intervened in multiple cases regarding reproductive rights over the years:

The Sovereign Uterus, an online space dedicated to publishing personal stories about abortion access and after care in Prince Edward Island, Canada.

In PEI, the right to choose: No longer ‘the shame of being shipped off the island’, the Globe and Mail, April 1, 2016

No Woman Is an Island, The Walrus, February 2016

P.E.I. government must concede on abortion issue, The Guardian, January 7, 2016

Abortion access in Canada by the numbers, CBC News, January 5, 2016

Pro-choice group to take PEI to court over abortion access, The Globe and Mail, January 5, 2016

A mixed year for reproductive rights, The Toronto Star, January 3, 2016

P.E.I. women continue to face barriers to abortion despite easing of restrictions, The Toronto Star, December 27, 2015

Abortion group on P.E.I. to lobby for access to services on Island, CBC News, December 22, 2015

Abortions for some: Access still depends on who you are and where you live, Global News, December 9, 2015

Where in Canada can you get an abortion? It’s secret – for security reasons, Global News, December 9, 2015

Show your commitment on social media by sharing the facts about the equality issues in PEI.