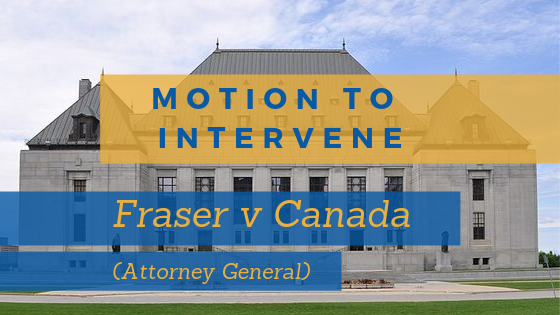 LEAF is pleased to announce that on October 11, 2019, the Supreme Court of Canada (the “SCC”) granted LEAF leave to intervene in the appeal before the SCC of the Federal Court of Appeal’s decision in Fraser v Canada (Attorney General). This case raises important issues regarding the substantive equality of women in the pension context.

LEAF is seeking to advocate for a robust interpretation of s. 15 equality rights under the Charter to ensure that the SCC does not revert back to a formalistic and decontextualized equality analysis applied by the lower courts, which did not take into account the unique challenges faced by working women with multiple demands of caregiving responsibilities and women who face reduced pension income as a result of such responsibilities.

Joanne Fraser, Allison Pilgrim and Colleen Fox (the “Appellants”) are former RCMP officers who participated in the RCMP’s job-sharing program. Under the job-sharing program, two employees would split the hours of one full-time position.

LEAF will argue that the courts’ analysis was improperly decontextualized from the gendered reality of caregiving obligations, which has been repeatedly recognized by the SCC and by international conventions regarding relevant international human rights obligations, including with respect to the gendered impact of pension scheme design.

Caregiving obligations continue to be overwhelmingly borne by women, leading to female-pattern employment, including job-sharing, part-time employment, or other flexible work arrangements. In this case, the Appellants were required to make job-sharing arrangements to meet work and family obligations, resulting in negative consequences to their pension entitlements due to the pension plan design and application.

The lower courts’ failure to conduct a contextual analysis led them to further err by introducing a new factor of individual choice to determine that there was no violation of s 15. The lower courts’ reliance on personal choice as a relevant factor was misplaced and undermined a contextualized, substantive equality analysis. The lower courts further erred by failing to consider the proper role of comparison in the s. 15 framework in the context of female-pattern employment and substantive equality.

Finally, LEAF will argue that without proper regard for the relevant contextual factors, the lower courts further failed to appreciate the effect of the legislation governing RCMP pensions, and how, despite being facially neutral, the disputed pension plan provisions create and perpetuate disadvantage based on sex and family status. Whereas full-time male officers could “buy back” their pension if they took an unpaid leave, the Appellant female officers whose family obligations necessitated them to engage in job-sharing were denied access to pension “buy backs”.