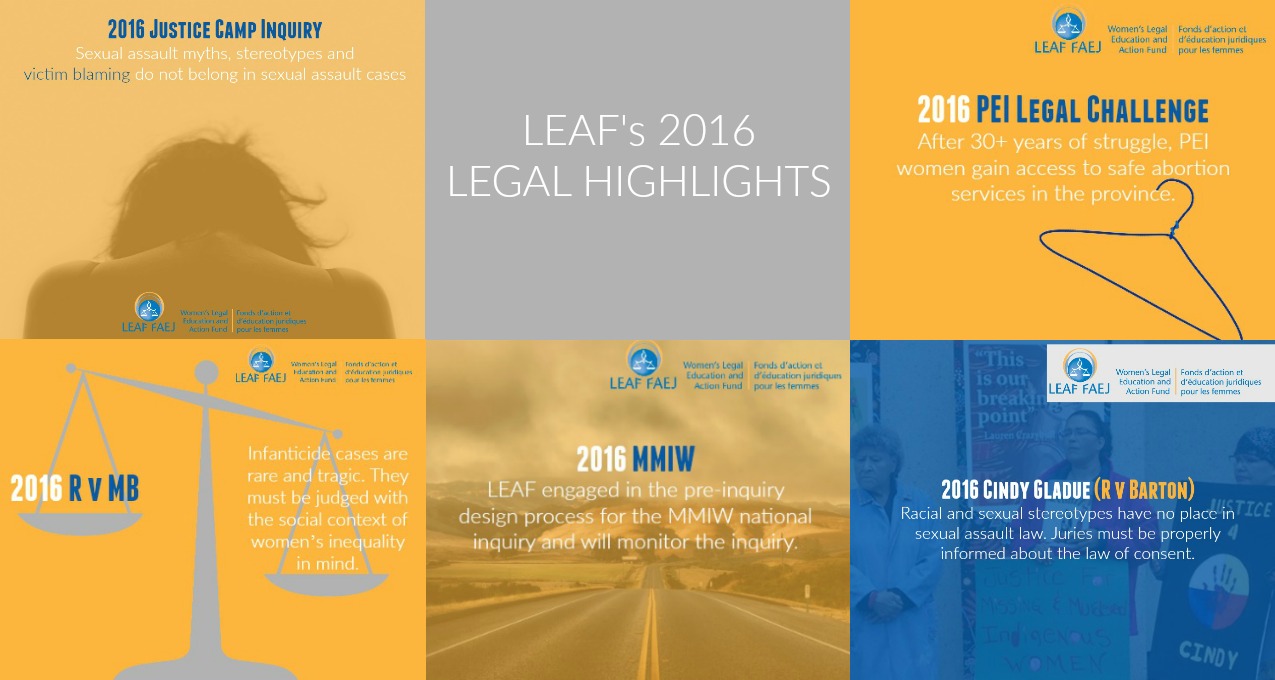 LEAF intervened in several high profile cases and initiatives in 2016. Here are our legal highlights for the past year. Thank you for supporting our organization.

A Historic Victory for Women and Reproductive Justice in PEI!
Since 1982, safe, legal abortion services have not been available in Prince Edward Island (PEI). In 2014, a fantastic, dedicated group of activists who have long advocated for abortion access in PEI invited LEAF to join their struggle. LEAF supported Abortion Access Now PEI to bring a legal challenge to PEI’s abortion policy. The application sought full and unrestricted access to on-Island, publicly funded abortion services for PEI women. On March 31, 2016, the PEI Premier announced that in the face of the legal challenge, his government would open a reproductive health clinic in PEI by the end of 2016. The legal challenge was integral to bringing about this remarkable result, finally gaining access to abortion services for women residing in PEI. After over 30 years of struggle, PEI women will be able to access abortion safely and legally in their own province! Click here to learn more.

This fall, LEAF attended the Canadian Judicial Council Inquiry Regarding Justice Robin Camp in Calgary. LEAF, in coalition with five other feminist organizations, intervened in the inquiry into Justice Camp’s conduct during a 2014 sexual assault trial in Alberta, when he infamously asked the complainant, a 19-year-old Indigenous woman who was homeless at the time of the assault, “Why couldn’t you just keep your knees together?” LEAF intervened to make arguments about the systemic impact on sexual assault survivors of judicial conduct such as that of Justice Camp. The Coalition ensured that a feminist voice for survivors was heard in the inquiry process. Click here to learn more.

In January, LEAF appeared before the Supreme Court of Canada in R v MB, an infanticide case where LEAF was the sole feminist intervener. Infanticide cases are rare, tragic and typically involve young, socially isolated and otherwise marginalized women who cause the death of their newly-born children. The Crown argued that the young woman should be convicted of murder, with a mandatory life sentence, whereas infanticide has a maximum sentence of five years. LEAF argued that the mitigating framework of infanticide is still necessary due to the social context of women’s inequality to which it responds. The Court affirmed that judges should have the discretion to recognize the overlapping social, economic, psychological, medical and other effects of childbirth in the commission of the crime. Click here to learn more.

In September, the Alberta Court of Appeal heard the Crown’s appeal in the Cindy Gladue
murder case, R v Barton. An Indigenous woman, mother and daughter, Cindy Gladue bled to death in a hotel bathroom in Edmonton. The jury believed the defence argument that she had consented to ‘rough sex’ and acquitted the man accused of her murder. LEAF and our partner, the Institute for the Advancement of Aboriginal Women, believe this outcome is deeply worrisome for the law of consent and reflects society’s widespread disregard for violence against Indigenous women. Chief Justice Catherine Fraser referenced the LEAF/IAAW factum in positive terms during the hearing. Click here to learn more.

LEAF is a founding member of the Legal Strategy Coalition on Violence Against Indigenous Women.
LEAF continues to explore ways in which it can address the tragedy of missing and murdered Indigenous women and girls (MMIW). LEAF participated in symposia earlier this year intended to assist with the design process for the national inquiry on MMIW, and intends to actively monitor the inquiry as it moves forward. Click here to learn more.