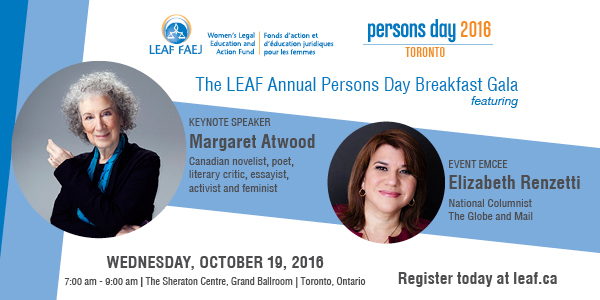 The Persons Day Breakfast Gala is SOLD OUT

The Women’s Legal Education and Action Fund (LEAF) will host the Annual Persons Day Breakfast Gala on Wednesday, October 19, 2016 from 7:00 am until 9:00 am at the Sheraton Centre hotel in downtown Toronto.

This event features Margaret Atwood and guests from the legal, academic, labour, private and public sectors.

The funds raised for LEAF at this event directly support our vital work in advancing substantive equality rights for women and girls in Canada through litigation, law reform and public education. LEAF’s interventions in numerous high-profile cases before the Supreme Court of Canada since 1985 have not only shaped the interpretation of the Canadian Charter of Rights and Freedoms – they have shaped the national conversation.

Margaret Atwood is the author of more than forty books of fiction, poetry, and critical essays. Her latest book of short stories is Stone Mattress: Nine Tales (2014). Her MaddAddam trilogy – the Giller and Booker prize-nominated Oryx and Crake (2003), The Year of the Flood (2009), and MaddAddam (2013) – is currently being adapted for HBO. The Door is her latest volume of poetry (2007). Her most recent nonfiction books are Payback: Debt and the Shadow Side of Wealth (2008) and In Other Worlds: SF and the Human Imagination (2011).

Her novels include The Blind Assassin, winner of the Booker Prize; Alias Grace, which won the Giller Prize in Canada and the Premio Mondello in Italy; and The Robber Bride, Cat’s Eye, The Handmaid’s Tale, and The Penelopiad. Her new novel, The Heart Goes Last, was published in September 2015.

Elizabeth Renzetti is a national columnist with the Globe and Mail. She has been the newspaper’s Arts and Books editor, and was a correspondent in the London and Los Angeles bureaus for almost a dozen years. She appears frequently on radio and television to discuss current events. In 2015, she was the Kierans-Janigan Fellow in the Southam Journalism program at Massey College, University of Toronto.

Elizabeth’s first novel, Based on a True Story, was published by House of Anansi Press in June 2014, and became a national bestseller. A journalist for almost 25 years, she was the Rogers Distinguished Visiting Professor at Ryerson University in Toronto in 2014. Her work has appeared in many publications, including Maclean’s, Report on Business Magazine, Chatelaine and Elle Canada. Her essays have appeared in several anthologies, most recently Between Interruptions: Thirty Women Tell the Truth About Motherhood.

Elizabeth Renzetti lives in Toronto with her husband, two children and a cat named Perdu who keeps getting lost.

LEAF is proud to partner with the Ontario Justice Education Network (OJEN) and Law in Action Within Schools (LAWS) to host high school students to attend the Breakfast. They also participate in a full day of interactive and educational workshops led by women in the legal profession.

If you have any questions, please do not hesitate to contact us. We look forward to seeing you at this year’s event!

SPECIAL THANKS TO OUR SPONSORS

Disclaimer: Photographs taken at this public event will be used in LEAF print and online publications.