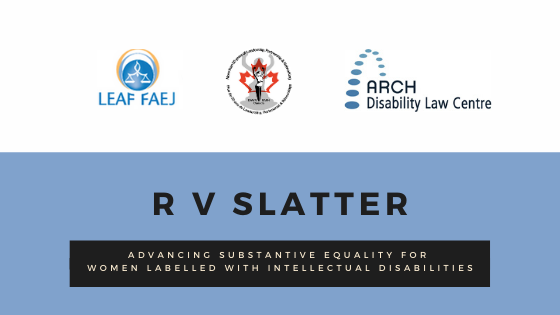 On May 19, 2020, the coalition consisting of LEAF, DisAbled Women’s Network Canada (“DAWN”) and ARCH Disability Law Centre (“ARCH”) was granted leave to intervene in R v Slatter to appear before the Supreme Court of Canada.

The LEAF-DAWN-ARCH coalition, represented by Suzan Fraser (Fraser Advocacy) and Kerri Joffe (ARCH), will advance an intersectional equality analysis highlighting the implications of the case on the substantive equality rights of women labelled with intellectual and/or developmental disabilities, and on their access to justice.

LEAF-DAWN-ARCH’s interest in the appeal

This case involves a woman labelled with an intellectual disability who disclosed sexual assault. At trial, defence counsel argued that the complainant’s evidence was unreliable, because her disability made her suggestible. The trial judge convicted the accused of sexually assaulting the complainant.

The majority of the Ontario Court of Appeal overturned the conviction and ordered a new trial, finding the judge’s reasons were not sufficient. In particular, the majority held that that the trial judge failed to address what they found to be a central issue: the complainant’s reliability and suggestibility.

“This appeal is an important one for the LEAF-DAWN-ARCH coalition,” says Megan Stephens, Executive Director and General Counsel of LEAF. “Building on our past interventions in sexual assault appeals, our submissions will ensure that the Supreme Court appreciates how the imposition of a more onerous standard when assessing the reliability of evidence of complainants labelled with intellectual and/or developmental disabilities can undermine their substantive equality rights.”

“Equality rights for women and girls with disabilities have not been won yet in Canada,” says Bonnie Brayton, Executive Director of DAWN. “This case, which could substantially advance the concept of intersectional human rights as the desired framework, begins to move the courts and judicial system into the real world of victims of gender–based violence, where intersecting identities place some women at higher risk of being a victim, and can also make them less likely to be believed.”

“There are fundamental access to justice issues at stake for women with disabilities in this appeal,” states Robert Lattanzio, Executive Director of ARCH. “LEAF-DAWN-ARCH’s intervention focuses on the role of generalizations and stereotypes about women labelled with intellectual and/or developmental disabilities. These generalizations minimize the reliability of women with disabilities’ testimony in sexual assault cases, and have a deeply damaging impact on their access to justice.”

LEAF-DAWN-ARCH’s arguments have been, and will be, informed and supported by a case committee composed of academics and practitioners with expertise in the relevant issues. The committee members for this intervention are (in alphabetical order): Shelley Fletcher (People First of Canada), Karine-Myrgianie Jean-François (DAWN), Barb McIntyre (Boost Child & Youth Advocacy Centre), Janet Mosher (Osgoode Hall Law School), Roxanne Mykitiuk (Osgoode Hall Law School), and Tess Sheldon (Faculty of Law, University of Windsor).

For background and judicial history of the case, see our earlier announcement.