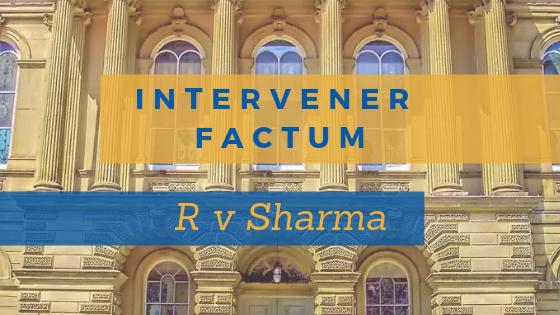 On Monday July 15, 2019, the Women’s Legal Education and Action Fund (LEAF) and the David Asper Centre for Constitutional Rights (the Asper Centre) filed their intervener factum with the Ontario Court of Appeal in R v Sharma, a case challenging the constitutionality of Criminal Code provisions (ss 742.1(c) and (e)(ii)) which eliminate conditional sentences for certain offences.

LEAF and the Asper Centre intervene to submit that the constitutionality of the provisions must be assessed in the context of systemic discrimination against Indigenous people, especially Indigenous women, in the administration of criminal justice. Their submissions focus on the proper interpretation and application of s 15 of the Charter and the need to consider Indigenous women’s substantive equality rights at sentencing.

Cheyenne Sharma, the appellant, is a young Indigenous woman, an intergenerational residential school survivor, and a single mother. Facing financial hardship and the potential of eviction for her and her two-year-old daughter, Ms. Sharma acted as a drug courier and imported 2 kg of cocaine into Canada. She was convicted of importing drugs.

As an Indigenous person, Ms. Sharma is entitled to the use of the Gladue framework in her sentencing (under s 718.2(e) of the Criminal Code). This individualized and contextualized framework requires judges to consider alternatives to incarceration when sentencing Indigenous offenders. One such alternative is a conditional sentence, a community-based alternative to a custodial sentence. However, because Ms. Sharma was convicted of importing drugs, an offence with a maximum sentence of 14 years, both ss 742.1(c) and (e)(ii) of the Criminal Code render a conditional sentence of imprisonment unavailable.

The sentencing judge acknowledged that, prior to the 2012 enactment of these provisions, Ms. Sharma would have been eligible for, and would have received, a conditional sentence. He did not accept, however, that the provisions barring him from imposing such a sentence infringed either her ss 7 or 15 Charter rights.

LEAF and the Asper Centre’s Intervention

LEAF and the Asper Centre are intervening to advocate for the substantive equality rights of Indigenous women at sentencing. Through an intersectional analysis, their submissions highlight how systems of discrimination based on gender, race, socio-economic status, and colonialism shape the experiences of criminalized Indigenous women in the Canadian criminal justice system.

They submit that by barring Indigenous people from accessing conditional sentences as an alternative to custodial sentences, ss. 742.1(c) and (e)(ii) of the Criminal Code preclude sentencing judges from adequately engaging the Gladue framework, and deny Indigenous offenders the full benefit of this framework. LEAF and the Asper Centre argue that this has the effect of exacerbating discrimination faced by Indigenous people in the administration of criminal justice. This has a particularly pernicious impact on Indigenous women, who face systematic disadvantage at all points along the victimization-criminalization continuum. The victimization-criminalization continuum is a feminist concept that understands women’s experiences of criminalization and victimization as inextricably linked and mutually reinforcing.

LEAF and the Asper Centre contend that by magnifying the very injustices the Gladue framework is intended to redress, the impugned provisions violate the constitutional imperative of substantive equality guaranteed by s 15 of the Charter.

While no date has been set for the hearing of this appeal, we anticipate that it will be heard later this fall.

We thank Jessica Orkin and Adriel Weaver of Goldblatt Partners LLP who are acting as pro bono counsel for LEAF and the Asper Centre on this important intervention.

The David Asper Centre for Constitutional Rights is devoted to realizing constitutional rights through advocacy, research and education. The Centre aims to play a vital role in articulating Canada’s constitutional vision to the broader world. The cornerstone of the Centre is a legal clinic that brings together students, faculty and members of the bar to work on significant constitutional cases and advocacy initiatives. The Centre was established through a generous gift from U of T law alumnus David Asper (LLM ’07). For more information please visit www.aspercentre.ca